We're doing inventory and will not be processing or shipping orders from May 4-16. We apologize for any inconvenience and thank you for your  support.

What or who was "Oneida Community" and why silverware 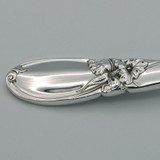 What or who was Oneida Community and why silverware

Many of us interested in silverware or flatware have looked on the back of a fork or spoon and found the words Community or Oneida Community. What is this about. Sounds like a Native American tribe from decades ago.

John Humphrey Noyes was a native of Vermont, born in 1811 and raised there as a child. His mother had strong religious beliefs and taught at least some of these beliefs to her son John. John however was going in different directions than traditional teachings. He was introduced to the “Second Great Awakening” that enticed thousands of people during the early 19th century.

John attended Yale Divinity School as a young man where he adopted the “religious doctrine of perfectionism”. The doctrine stated that a man had the ability to be spiritually and physically perfect. This was not mainstream thinking at Yale, and he eventually left the school. He set out to be a preacher.

He had a few dozen followers at first under the name “Society of Inquiry” which was changed to “The Community”. A continued criticism of the group was the belief that marriage was not necessary. This was not however a “free love” community. There were many restrictions all aimed at the perfection of life. That perfectionism included work as well.

By this time the Community moved to Oneida New York. Their first business venture was growing and selling fruit which was difficult in upstate New York. For a while the group has some success with leather bags and metal animal traps. Supposedly, since there was a silverware business nearby on the same riverbank, someone came up with the idea of silverware manufacturing.

In 1880 the religious aspect of the community collapsed. John had grown deaf and abandoned the group as well. It was decided that the community assets including Oneida silverware should form a corporation. A small group of members including John Noyes’s son took on the venture. By the early 20th century using newspaper and magazine advertising, the product became known by most every housewife in the country and was a sought after.